A Bollywood Affair by Sonali Dev 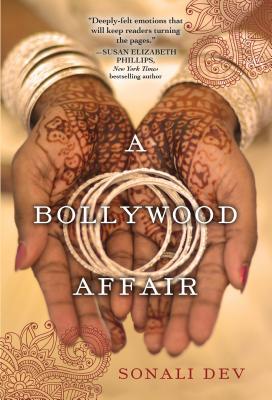 Description: Mili Rathod hasn’t seen her husband in twenty years—not since she was promised to him at the age of four. Yet marriage has allowed Mili a freedom rarely given to girls in her village. Her grandmother has even allowed her to leave India and study in America for eight months, all to make her the perfect modern wife. Which is exactly what Mili longs to be—if her husband would just come and claim her.

Bollywood’s favorite director, Samir Rathod, has come to Michigan to secure a divorce for his older brother. Persuading a naïve village girl to sign the papers should be easy for someone with Samir’s tabloid-famous charm. But Mili is neither a fool nor a gold-digger. Open-hearted yet complex, she’s trying to reconcile her independence with cherished traditions. And before he can stop himself, Samir is immersed in Mili’s life—cooking her dal and rotis, escorting her to her roommate’s elaborate Indian wedding, and wondering where his loyalties and happiness lie.

Heartfelt, witty, and thoroughly engaging, Sonali Dev’s debut is both a vivid exploration of modern India and a deeply honest story of love, in all its diversity.

Review: I loved this book. I’ve read books set in India before but they were usually historical romances, where the characters traveled to India for the colonial reasons. This, however, was the first contemporary romance I’ve read which is set in India. I’ve wanted to read this book for a while now. The lovely ladies at Smart Bitches, Trashy Books gave this book a rare “A”.And then the book went on sale for Barnes and Noble and I snatched it up!

With all the discussion regarding diversity in books, and in particular, in romance novels, I really wanted to read this book now. Plus, I stopped to chat with Sonali Dev while I was at the RWA Literacy signing and she was so kind and gracious that I couldn’t wait to read her book!! Since I had never read a contemporary romance set in India, I was a little concerned I would be lost in a culture I was unfamiliar with. And I was. The culture was a bit confusing and the customs were different and I wasn’t sure what some of the words meant. This doesn’t sound like a positive review, does it? Don’t worry, it gets better.

So I stopped reading for a moment. And I looked up what “dal” and “rotis” were. Then I realized, this is no different than a historical novel. The first time I picked up a Regency book, I didn’t know what the rules of the ton were. Or why it would be bad for a countess to proceed to dinner before a duchess. These were things I learned from either reading a lot of Regency books or from looking it up. As for the language, it soon became easy to recognize ‘bhai’ for brother. I mean, if I can read a book with Scottish or worse, Cockney, accents written out, surely I can pick up on a few Hindu words and determine their meaning from contexts clues. Once I came to that conclusion, I return to the book and was soon immerse in another culture, another way of life.

Dev weaves a world both familiar and foreign. Mili, the heroine, moves from India to Michigan to go to school. She takes with her the values, morals and culture of her village and it is fascinating to see them juxtaposed with American college culture. Adding to that contrast is Mili’s roommate, Ridhi. Ridhi is born in America but her family is Indian. Rather than seeing an adaption of American culture, Ridhi’s family combined their Indian heritage with the American culture to create a vibrant, enthralling culture of their own. This is especially seen at Ridhi’s wedding, which is so effervescent and fun that it makes me want to watch tons of Bollywood movies.

What I liked best about this book, and about every romance novel, is that the book boils down to the relationship between the heroine and the hero. In the beginning of the book, Samir comes off as kind of a jerk. There are hints of kindness in him but for the most part, he is presented as the uncaring hero who does not want an emotional relationship with whomever he is dating. His devotion to his brother is clear but that is tempered by his determination to get his brother’s marriage to Mili dissolved, something which the reader knows will shake Mili’s entire sense of being.

Despite this, Samir quickly becomes a redeemable character. The relationship between Mili and Samir begins as a friendship, albeit one fraught with delicious sexual tension. Each character grows individually as they grow as a couple. Mili learns that there is more to her sense of self than just an abandoned wife. And Samir learns to confront the demons of his past, although not without a push from Mili. This book brought me back to the bones of what I love about romance novels: watching a relationship bloom between two characters, watching their love grow stronger, watching that love be shaken, and then all seems lost, watching they reunite and become even stronger as a couple.

“If you don’t believe in a happy ending, what are you living for?”

“One shot of pain jolted her eyes before ten shots of courage steadied her gaze.”