Opening Up by Lauren Dane 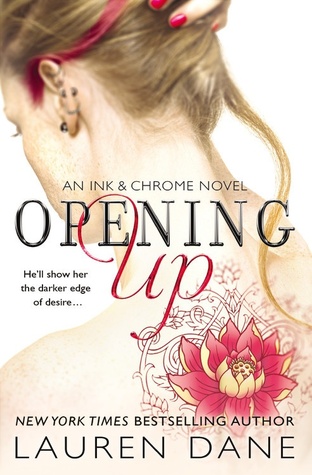 The men of the Twisted Steel custom motorcycle shop are great with their hands… and they’re not afraid to get dirty.

PJ is exactly the kind of woman Twisted Steel owner Asa Barrons doesn’t need. The last thing he wants to do is mix business with pleasure, and PJ has some of the best custom detailing he’s ever seen. But the chemistry between them won’t be denied, and soon he’s introducing her to a whole new world in the bedroom, pushing her far beyond anything she’s ever experienced. PJ finds she can’t get enough, but how far is too far before he consumes her completely?

Review: I only started reading Lauren Dane books a few months ago and can’t believe I’ve been missing out for so long. After reading her Brown Family series, Delicious, and The Hurley Boys, I was excited to start her Ink and Chrome series. The other series I had read by her were all interconnected so I’m a little happy that this series is independent of the others and I don’t have to figure out who is related to who. In general, I just want to take a moment and gush about Lauren Dane book covers. Holy accuracy Batman! I love that most of the characters are tattooed and that the tattoos they have are depicted on the book cover! And this cover is gorgeous and detailed too. I love PJ’s lotus flower!

Dane’s previous series introduced the readers to tattoo shops and rock-star lifestyles. In this book, she takes the reader in the world of custom car designs and racing. To be honest, I was a little hesitant. I’ve read Erin McCarthy’s Fast Track series and that’s about all the car related books I read. My dad loves to watch all those custom car shows but they usually bore me out of my mind. However, my fears were for naught. Dane introduced the reader to an interesting world, centered on the Twisted Steel shop, run by Asa and his best friend Duke. In the end, I found one of my dislikes about the book was that it didn’t focus enough on the shop! I ended up doing a total 180. I wanted to see more of the shop and a little less of PJ’s family drama, even though they were in the car world. I do hope that some of her siblings get books.

I really liked watching the relationship between PJ and Asa build throughout the book. It actually took a few months before they gave into the attraction between them. One of the issues addressed was the age difference between the couple. Asa was 12 years older than PJ, who was 25. In terms of historical romances, age differences are usually brushed over. In contemporary romances, they are given a bit more light. I didn’t feel like the age difference was creepy. PJ was a mature adult who decided she wanted to be in relationship with Asa. Their relationship hit other bumps aside from just the age issue. There was the usual lack of communication problems but they didn’t grow out of the control and wreck the relationship. What I liked even more was that falling in love was the make or break point. Neither ran scared when the other confessed their love. They continued to support each other and have a mature relationship. This book, like most Lauren Dane books, was extremely sensual. There were hints of BDSM, mostly floggers and the like. However, that is intertwined but doesn’t overtake and define their relationship. There’s also humor twisted in with the steam, i.e. PJ quoting Arthur C. Clarke in the middle of sex.

Overall, I really like the direction of Lauren Dane’s new series. Her books combine the right amount of sensuality with likeable characters, humor, and plot.

“Tenderness flooded her to near bursting. How did she get so lucky that she found this? She never expected that love would be something so utterly certain. Asa had called to her from the start and now he fit in her life in a way that lightened her heart and made her feel grounded all at once.”

“This was making love. It didn’t have to be sweet in a traditional sense. It was sweet for Asa and PJ. He loved her and cherished her, and the way he touched her, like he’d never get enough, humbled her to her toes. Love did that. Laid you bare, broke you open and opened you up. It made you want to be better.”