The Prince and I

The Prince and I by Karen Hawkins 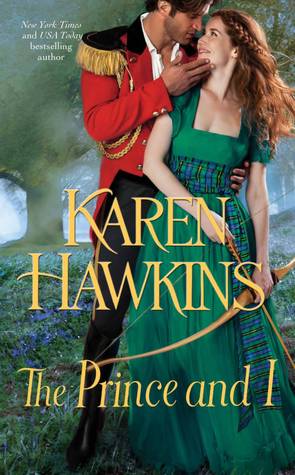 Gregori Romanovin, Oxenburg’s warrior prince, is escorting his grandmother to a house party deep in the Highlands when he and his entourage are robbed at sword point by a group of ruffians led by a man the locals have dubbed “The Scottish Robin Hood.” The battle-savvy prince instantly realizes there’s something different about this thief, and it’s not just the Scottish accent—it’s the fact that “he” is really a “she.”

Lady Murian, a young widow out for revenge against the powerful earl who killed her husband and stole his birthright, is now living in the woods with her family’s banished retainers. To stay alive, she and her band of men rob rich nobles coming to visit the evil earl. But when she ambushes the Prince of Oxenburg’s golden coach, she gets far more than she expected. For when the prince uncovers her true identity, she’s afraid that he might be the real thief…of her heart.

Review: I’ve been reading Karen Hawkins books for years now. They’re the easy pick-up, quick read, just enough historical detail to laying the setting, type of book I love to read. Her second installment in the Oxenburg series, though third book dealing with the Oxenburg prince brothers, is just that book. The first book in the series, The Prince Who Loved Me was a retelling of Cinderella, set in Regency Scotland. This book, The Prince and I, is a take on the Robin Hood tale, complete with a Little John, or rather a Giant Ian, a Will Scarlet and best of all, a female Robin Hood. Who actually isn’t robbing the rich but rather asking for donations from the carriages she and band of merry, eh, widows, stops. The basic plot of the book follows Prince Max of Oxenburg who is travelling to Rowallen Castle in Scotland with his grandmother, Grand Duchess Natasha, and has his carriage held up by “Robin Hood” and her gang. Prince Max quickly realizes that Robin Hood is a woman, Lady Murian, to be exact, and that they have a common enemy, the Earl of Loudan.

While this book is mostly a light-hearted romp around the Scottish countryside, full of derelict cottages, disguises, a hunt for a tiara and journal, helpful attractive soldiers and the main couple falling in love, it does address a few serious issues amidst the brevity. The first is the tragedies of war. Max is introduced as a ‘Warrior Prince’, a general for Oxenburg during the Napoleonic Wars. His best friend had recently died in battle and the book addresses his morality as well as the fate of the loved ones soldiers leave behind. Murian, a widow, is able to address the realities of loved ones left behind and she and Max are able to overcome this in their relationship. It was also nice that Murian wasn’t the oddest of all romance tropes, the virgin widow. Murian was comfortable with her sexual desire for Max and there isn’t shame in their relationship.

Hawkins also addresses noblesse oblige (never thought I’d be using something I learned in my high school Government and Politics class for a romance novel review). Both Prince Max and Lady Murian have assumed responsibility their people, his soldiers and her former servants. Their devotion towards their ‘servants’ is refreshing and both Murian and Max treated as more than servants, as actual human beings. Not to say that this is unusual for romance novels. It just seems more present in Hawkins’ book. The ‘servants’ are more than just background, they are helpful and vocal characters who enrich the ploy.

Also, I adore Max’s grandmother. Some of my favorite secondary characters are the grouchy grandmothers or guardians who can get away with saying anything they want but still have a heart of gold. Best of scene of the book was when she’s telling the guards a bedchamber is hers (it wasn’t) and that if they kicked in the door, she’d be naked (she wasn’t). Can I be her when I grow up?

Overall, an interesting twist on Robin Hood and an enjoyable read!  Side-note, don’t you totally love the cover?