Dig a little and you’ll find photos of me in the bathtub with Ezra Stern.

Get your mind out of the gutter. We were six months old.

Pry and one of us might confess we saved our first kiss for each other.

The most clumsy, wet, sloppy . . . spectacular thirty seconds of my adolescence.

Get into our business and you’ll see two families, closer than blood, torn apart in an instant.

the boy no one noticed, is a man no one can ignore.

Tell me the boy who always felt like mine is now the man I can’t have.

When we find each other again, everything stands in our way–secrets, lies, promises.

But we didn’t come this far to give up now.

And I know just the move to make if I want to make him mine.

**QUEEN MOVE will have the special release week price of $3.99. After that, the price will increase.** 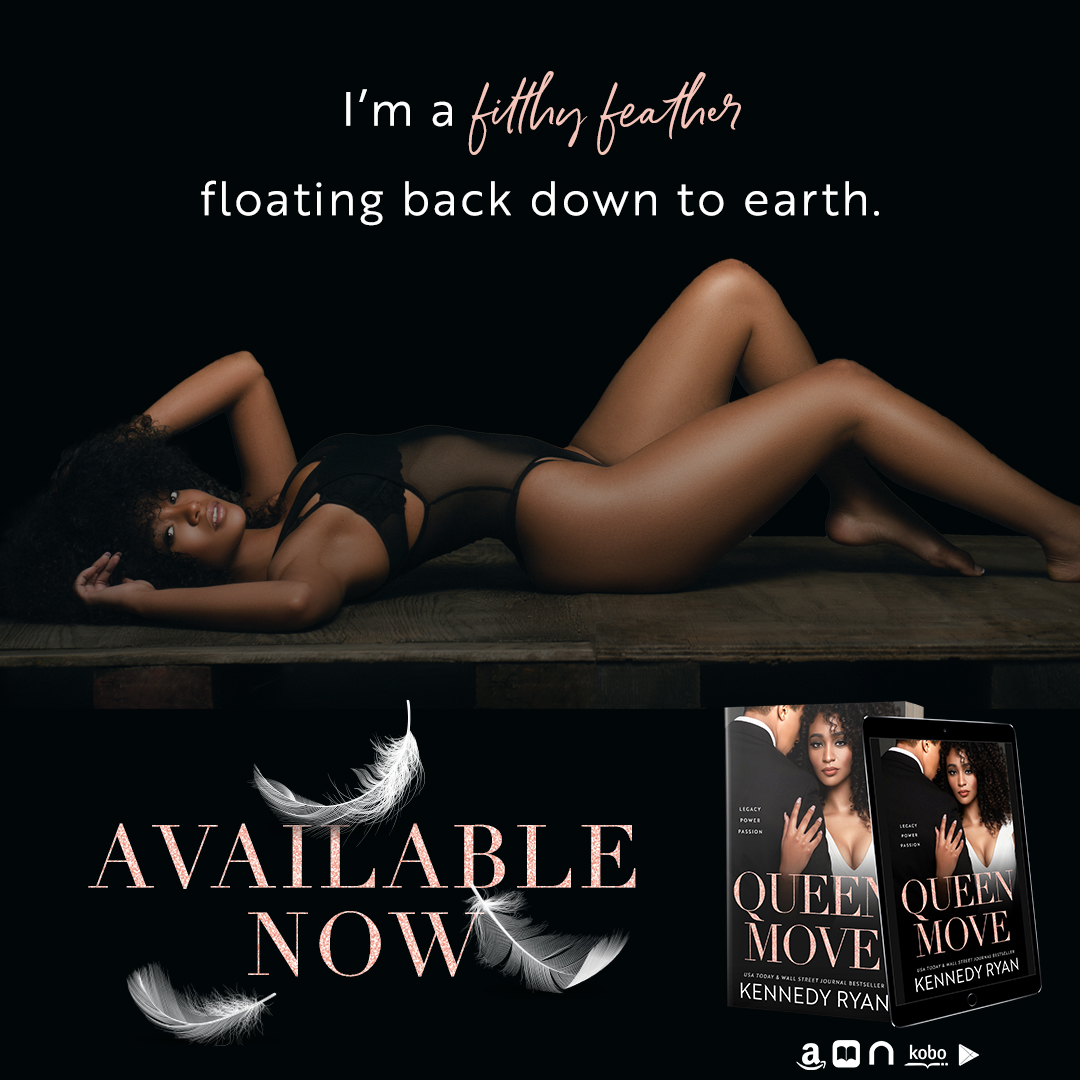 About Kennedy Ryan A RITA® Award Winner and USA Today Bestseller, Kennedy Ryan writes for women from all walks of life, empowering them and placing them firmly at the center of each story and in charge of their own destinies. Her heroes respect, cherish and lose their minds for the women who capture their hearts Kennedy and her writings have been featured in Chicken Soup for the Soul, USA Today, Entertainment Weekly, Glamour and many others. She has always leveraged her journalism background to write for charity and non-profit organizations, but has a special passion for raising Autism awareness.The co-founder of LIFT 4 Autism, an annual charitable book auction, she has appeared on Headline News, The Montel Williams Show, NPR and other media outlets as an advocate for ASD families. She is a wife to her lifetime lover and mother to an extraordinary son.

You know when you’ve been waiting and anticipating a book for so long that you’re afraid it won’t live up to your expectations? Rest assured, Queen Move actually surpassed all of mine! Honestly, coming up with words for how much I loved this book has been difficult. There isn’t a single Kennedy Ryan book that I didn’t adore but Queen Move has topped all of them. It supplanted my initial favorite book of 2020 and now holds the reigning stop.

Kimba and Erza are childhood friends who share an unbreakable bond. As they grow up, their friendship moves to something more but outside forces break them apart, physically at least. When they briefly see each other again, that bond makes itself known. However, because they aren’t at a place to act on it, they are forced to go their separate ways for fear of the destruction that bond will cause. I mean, just read this quote from Erza describing his relationship with Kimba:

I do know if soul mates are real, Kimba is mine. I believe that if people are “created”, we were made together. She was there for my scaffolding- there when my flesh was knit over my bones. And if love is not just an emotion, but a type of eternity, an infinity that lives in our hearts, then we have always been in love. It’s an ageless thing that isn’t about puberty or chronology, or even if we get to live our lives together.

When they finally meet again, Kimba is a powerful political campaigner who just helped elect the President, see All the King’s Men duet. Erza is a single father who runs a school in Atlanta. The bond between them is there, as strong as ever. Both are at pivotal moments in their lives. Kimba especially has been given news that makes her reexamine what she really wants out of life. As they come together, they have serious issues to work out in order to have a future together.

Kennedy Ryan has created the most complex and realistic characters in Kimba and Erza. Both have struggled with their identities, Erza specifically, growing up biracial in Atlanta. Kimba, as well, has had to fight her way out of the legacy of her family and create her own. In addition to Kimba and Erza, the minor characters in the book, from Ezra’s son, Noah, to their friends and families, are all excellently crafted.

Honestly, there isn’t a single thing about this story that I don’t love. All I can do is end this review by saying read this book, now. And here’s another of quote to showcase just how beautiful this story is:

It’s the kind of perfect kiss that has nothing to do with technique of experience. Nothing even to do with ardor, though that’s evident in the way we clutch, we cling. It’s perfect because it’s her and it’s me and it’s about time and it’s overdue. And we kiss like there’s no tomorrow because there have already been too many yesterdays, too many years we were apart. Centuries separated us, but now here we are and here’s our chance. It’s not ideal, and it has its complications, but it’s ours. And we’re taking it.

I received an ARC in exchange for an honest review.

Happy #CoverLustFriday! I’m not sure I’d call a book about Eleanor of Aquitaine and Henry II a romance since they historically had a contentious relationship. I do love this old school cover though!
I finished The Viscount Made Me Do It by Diana Quincy last night and really enjoyed it!
Cover Reveal for yesterday’s #StepBackSaturday is A Breath of Scandal by Connie Mason!
Happy #StepbackSaturday!
Happy #CoverLustFriday from my favorite purchase of the week! I took a risk on an eBay purchase and freaked when it was the original cover of Vivid by Beverly Jenkins!
I’m not gonna lie, some of the clinch covers of IAD are not the best. Bowen doesn’t really look like a romance hero and this pose does nothing from Mari. I’m not usually a fan of new covers but I actually think the newer one is better. Either way, I’m enjoying my reread for bookclub this week!