After a six-year absence, Addison Potts is back in Charleston to stir things up. And what better place to make her villainous return than her estranged cousin’s wedding? Only, the nuptials hit a snag when the bride doesn’t show, leaving Addison to play getaway driver for the jilted groom. A groom whose heartbreaking smile and deep, southern drawl she should not be noticing…

Elijah Montgomery DuPont is the future mayor of Charleston. From his military career to city hall, every detail of his life has been meticulously planned. Until now. His only respite from life’s sudden upheaval is Addison, his new, improbable best friend. She makes him happy. Grounds him. And public disapproval be damned, he’s not willing to give her up. But with an election on the line and public pressure rising, Addison and the cruel hand of fate—might not give him a choice. 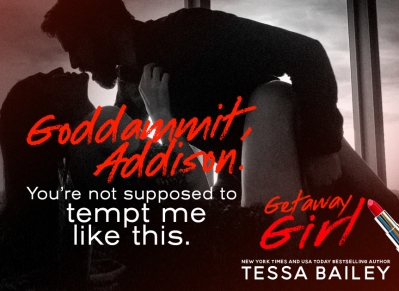 “Well…” I stop to clear the rasp from my voice. “If there’s no picture of us together, we should take one.”

“Good idea.” He crooks his finger at me, unwittingly sealing his fate. “Come here.”

I put my jacket on downstairs when I thought we were leaving, but I take it off now, simply letting it fall. “I want you in the mayor’s chair.”

His eyes stray to my pooled jacket, then tick to mine. “You what?”

“In the picture. I want you sitting in the chair.”

“Oh. Right.” He slides out the brown leather, high-back executive chair and drops
into it. “What about you?”

My bravery slips. Whose wouldn’t? This powerful, gorgeous man sits before me, outlined by the city he’s been elected to run. His thighs are thicker than my waist, his sleeves caught up around his elbows. A strong man. A man of conviction who will not be seduced unless he really wants to be.

Or is driven out of his mind and can’t resist.

Before I can second-guess myself, I move between his outstretched thighs and ease myself onto his lap. “Addison.”

I send him an innocent look over my shoulder. “Yes, Captain?”

His chest rises and falls. Once. Twice. “Take the picture.”

The fact that I’m playing with fire stops psyching me out…and begins to excite me. Maybe it’s the gravel in his tone…or the big fists that come to rest on the desk. No…it’s definitely the way he presses his nose to my hair and inhales. As if I’m not going to notice. But I do. I do and it makes me braver. Makes me throb between my legs.

“Sorry.” I lean across the desk where I set my purse, taking my time digging through to find my cell before pulling it out, searching for the camera app. All the while, his muscles bunch beneath me, harder and harder…and that’s when I feel it. His erection lifts under my backside, so thick and glorious, I bite my lip to stop from crying out. I want to, though. I want to sob at the proof that he’s physically attracted to me and at least I have that much.

My hands are shaking as I lift the camera, my instincts screaming at me to grind down. Elijah’s breath is pelting the back of my neck. Other than that he’s completely still, though. But when I flip the camera around to selfie mode and get my first look at his face, there isn’t a jury on the planet that would rule him unaffected. His eyes are closed, nostrils flared, mouth open against my hair.

Elijah stands up and takes me with him, my ass pressed to his lap, feet
dangling off the ground. As if I weigh nothing more than a child. It only lasts
for a couple mind-blowing seconds, though, before he settles me on the ground
behind his desk. His heat begins to leave me and I sense my chance slipping
away, so I twist around to face him. Still mere inches away from me, he pauses
with his head tipped forward, hands flexing at his sides. “We could be more
than friends.” After easing myself backwards onto the desk, I snag his necktie
and tug him closer, guiding his hips between my open thighs. “Just for
tonight.”

His laugh is more like a rough expulsion of air, the scent of bourbon hitting me. “That’s not how things work,” he says, his palms scraping up my thighs, twisting in the hem of my dress. “Goddammit, Addison. You’re not supposed to tempt me like this.”

“I don’t always do what I’m supposed to,” I murmur, leaning up to bring our mouths close, a breath separating them. “If I wasn’t your friend, would you kiss me right now?”

His eyes fasten on my mouth, seeming darker than usual. Predatory. “You felt what you did to my cock, sugar. You know the answer to that.”

Oh my gosh. Coming up with the right words to describe my love for this book is so difficult. The amazing Tessa Bailey has been hinting about her bubble-butt hero on her Facebook group for months and I couldn’t wait to get my hands on him! I got an “early” copy of this book at Apollycon this weekend and had to stop myself multiple times from reading it right away. I knew if I opened the book, I won’t stop until I finished and I had Apollycon events to go to. However, once I got home and settled, I grabbed Getaway Girl and a cup of tea and basically didn’t get off my couch until I finished it. And I adored every minute of the read. Addison and Elijah are my new favorite characters. I cannot express how much I love them.

Okay, gushing over. Now I’ll focus on why this book is my top of 2018 already. This is a friends to lovers romance. Addison crashes her cousin’s wedding to Elijah in time to see him being left at the altar. She offers him a ride and thus becomes the “Getaway Girl”. To be honest, I was a little concerned this book would turn into a “run away from your problems road-trip” which sometimes can annoy me. However, to my delight, Elijah basically crashes at Addison’s place for a night and then goes back to face his new reality. But with a new friendship. Addison, who is in Charleston after her grandma’s death, has a harsh family history and reputation hanging over her head. Elijah, in contrast, is the darling of Charleston and is running for mayor. Addison becomes his escape from life in the public eye and Elijah becomes her support for changes she makes in her life. Both fight their attraction to each other to avoid ruining their friendship. But when they do give in, wow, do sparks fly. Tessa Bailey has always been the absolute queen of dirty-talking heroes. And Elijah does his fair share of dirty-talking. However, it’s Addison who really has the hot mouth. And her appreciation of Elijah’s thick bubble-butt, which he is self-conscious about, is just perfect. I don’t blame him for being self-conscious, I would be too if my butt had it’s own Twitter! As you can see, Tessa interjects humor into the sensuality of this story.

There were moments in this book that made me cry. There were moments that made me stop and screenshot parts to Tessa’s Facebook group because I wanted to share the humor. When I finished the book, I honestly hugged it to my chest. And then I went and bought a copy for my friend’s birthday so she can share in its total awesomeness.  This book just had so much heart and heat. It truly touched me and I can not share enough how much I loved it. If Getaway Girl is the only romance novel I read for the rest of my life, I would die happy. Stop everything and read it now!

Tessa Bailey and I at Apollycon 2018

Received a free copy from the author in exchange for an honest review.

Decided to post my first #CoverLustFriday with this gorgeous book from @amandalovesromance, Golden Paradise by Constance O’Banyon. I’ve never read this author before but I’m in lust with this cover!
More recent book mail. I won a copy of Holidays with the Wongs by Jackie Lau from @romancesparksjoy! I love Jackie’s books and while I haven’t read this series yet, I know I’m going to enjoy it!
I’m a little passed release date but I loved Love at First by Kate Clayborn. I was in a reading slump and this book helped pulled me out!
Currently Reading: Forever His Champion by Marie Lipscomb. So excited to read this final of Natalie and Brandon’s story! And it’s out tomorrow!
Time for February Wrap Up!
Cover Reveal for yesterday’s #StepbackSaturday is Lion Heart by Tanya Anne Crosby.