The Name of the Game

The Name of the Game by Jennifer Dawson 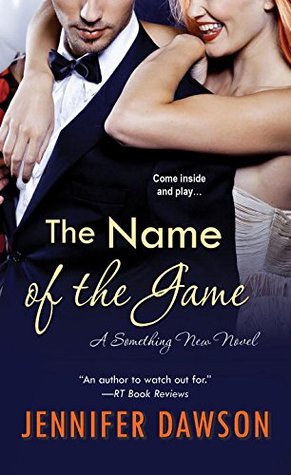 A professor of forensic anthropology, James Donovan is the reasonable sibling among the passionate, impulsive Donovans. But there’s nothing reasonable about his reaction to baker Gracie Roberts. She’s all wild curls and mouth-watering curves, as deliciously tempting as the sugary treats she’s famous for–and twice as irritating. But before long, James decides that getting a taste of her is one indulgence he can’t pass up. . .

Independent, smart, and sexy, Gracie’s year-long dry spell has her itching for a man. Responsible, health-obsessed James? Not in a million years! She needs a guy who knows how to let loose! But when James sets out to show her just how satisfying a disciplined man can be when pleasure is at stake, she learns just how sweet–and spicy–he really is.

Have James and Gracie found the recipe for love?

Review: I felt like I was thrown into the deep end with the start of this book. I was very confused the first few pages about who all the characters were. I quickly realized that this was not first book, and after looking it up, was actually the third book in the series. Despite that initial confusion, I quickly picked up who was who and now that I finished the book, I want to go back and read the first two!

This story follows the relationship between James and Gracie. Gracie is the best friend of both James’ sister and future sister-in-law so she is ingrained in his family circle. But, and this is probably seen in the first two books, James and Gracie are like oil and water together. It had been a while since I’ve read an enemies-to-lovers book and this is the perfect book for it! The chemistry between James and Gracie was potent and undeniable. It was clear that their dislike stemmed from a denial of their desires. Once they gave into their attraction for each other, they steamed up the pages. As a Whovian, it is now my life goal to play their alluded to Doctor Who drinking, and, *cough* other things, game. There was also a scene where they played out James’ high school fantasy of making out during a scary movie, complete with required cheerleader uniform. Their relationship even delved lightly into BDSM. James in control *shivers*. Even more so, I liked seeing James break his control at the end when he thought he lost Gracie.

I was really a fan of Gracie as a character. She was confident and flirty but had deeper layers. It’s also nice to see a poised, self-assured heroine who comfortable with her sexuality. I thought she was very well-developed. Underneath her confidence was a layer of hurt from her father’s abuse of her mother and abandonment. Gracie and James’ relationship had to move passed the hurts from their past to succeed.  They also had to move passed his tendency to try to control aspects of her life. For them, BDSM is fine in the bedroom but in the rest of their life, they need to make decisions together. Overall, I really enjoyed this book. I just bought the first two in the series and can’t wait for the next book!