By Tessa Bailey and Eve Dangerfield

Secret aspiring comedian Autumn Reynolds is a girl gone…not wild exactly. More like lazy. Since her boyfriend abandoned her in New York City for a bunch of improv groupies she’s had two priorities; sucking the nitrous out of whipped cream cans and making sex comics about her mysterious landlord.

Blake hates people—and sunlight—with good reason. Imagine his surprise when he finds himself lusting after his upstairs tenant, a sunny, Australian people pleaser down on her luck. Turns out his ability to terrify with a single scowl comes with an advantage. Autumn seems to like it. A lot. As evidenced by the prisoner-captive comic Blake was never meant to see.

As they embark on a three-date arrangement the rules are clear; filthy, ground breaking sex, no feelings or commitment required. When chemistry is this strong, though, attachment follows. As Blake and Autumn attempt to negotiate their New York romance, their prior histories and secret dreams come to the foreground. How long can these polar opposites remain Captivated, when all signs point to disaster? 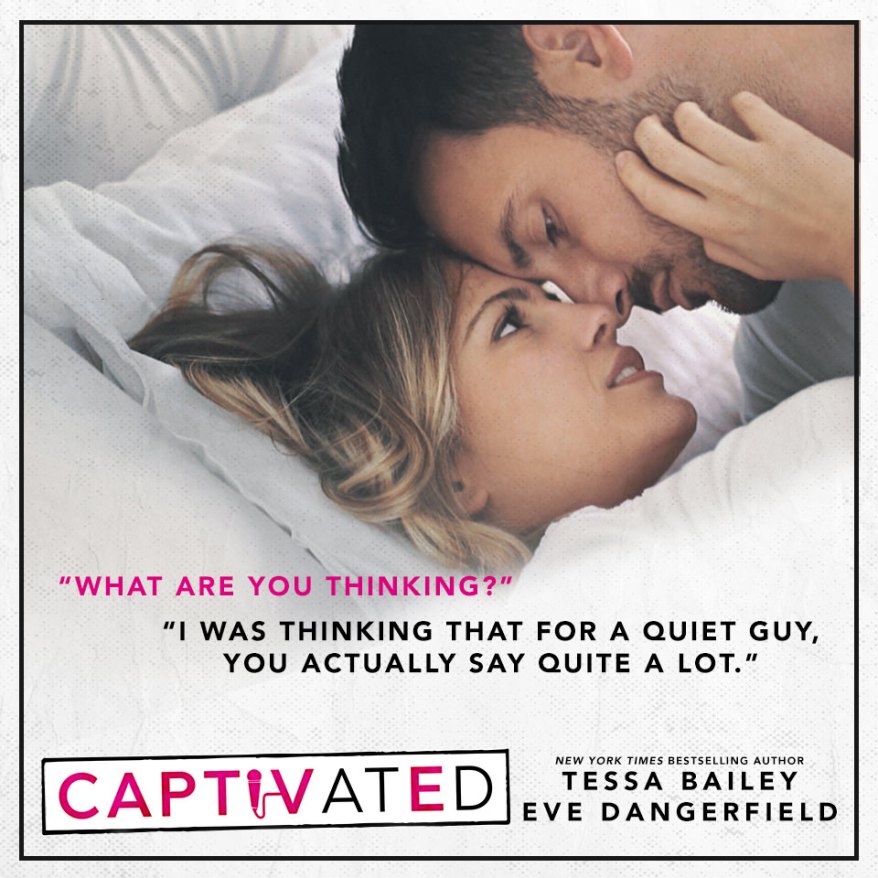 “Ms. Reynolds, you were telling me why you chose to draw me into your sex-picture.”

Several beats passed as her gaze dipped to his bare chest and traveled the length of him, top to bottom, side to side. “I really hope you won’t be offended, but you’re rather large and spectacularly intimidating and I’ve always had a-a…wish.” Her chest rose and plummeted, her words puffing out like little gusts. “A fantasy, really. To be jailed. Kept prisoner. Your likeness is sort of reminiscent of someone who could—not would, just could—do that to me.”

The blood running through his body rose a thousand degrees in temperature. “It turns you on. The idea of me holding you captive.”

She crossed her arms over her chest, but not before he caught sight of her stiff nipples poking through her t-shirt. “I guess you could say that. But—”

“Do we fuck, Ms. Reynolds? In that little head of yours?”

A squeak left Autumn and he watched as her thighs pressed together. “Um, maybe? I mean yes. Regularly, I’m afraid.”

Unbelievable. They’d barely exchanged a word since she moved in, yet they’d been mentally screwing each other’s brains out from two floors away. “Do you still want to know the face I made when I saw the drawing?”

Blake advanced on her, cataloguing everything. The way she backed up, then steeled her spine and attempted to hold her ground. The way she shivered and glanced at the door. Her very real apprehension forced him to make a decision. “Go home.”

Her expression was the physical embodiment of a record scratch. “Wait. What?”

“Go home, Fun-Size.” He took the drawing out of his pocket and offered it to her. “I don’t hold scared little girls prisoner, even if I look like I do.”

She now lives in Long Island, New York with her husband of eleven years and six-year-old daughter. Although she is severely sleep-deprived, she is incredibly happy to be living her dream of writing about people falling in love.

Eve Dangerfield has loved romance novels ever since she first started swiping her grandmother’s paperbacks. Now she writes her own unapologetically sexy tales about complex young women and gorgeous-but-slightly-tortured men. Eve currently lives in Melbourne with her sister and a zen-like rabbit named Billy. When she’s not writing she can usually be found drinking, dancing or making a mess. Often all at once. Calling her an author will get you kissed*

This site uses affiliate links — which means that, at no cost to you, if you click through and buy an item, I will earn a small commission for The Ripped Bodice.