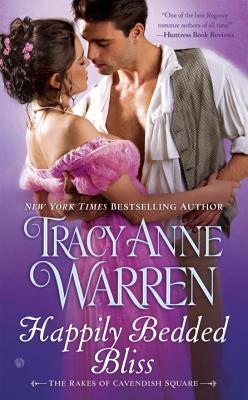 Description: From the New York Times bestselling author of The Bedding Proposal comes a seductive new novel about the most devilishly dangerous men in London…

When Lady Esme Byron happens upon a gorgeous naked man sleeping beside a secluded country lake, she can’t resist the impulse to sketch him. But when her highly improper drawing is mistakenly revealed at a party, she finds her once-pristine reputation in tatters.

Gabriel, Lord Northcote, may be a notorious rakehell, but he is still stunned to find himself accused of despoiling a duke’s sister—especially since he’s never set eyes on her. When Esme’s six irate brothers demand a hurried trip down the aisle, he has no choice but to comply. He thinks he can forget about his inconvenient bride but Esme Byron is no ordinary woman and Gabriel is about to learn just how unforgettable she can be.

It has been a while since I read a Tracy Anne Warren book and, to be honest, I wasn’t really impressed with the last few books in this series. However, for some reason, the youngest Bryon sister, Esme, has always stood out in my mind. So when her book was released, I put aside my disinterest in the series and decided to read it. I’m glad I did!

Esme is an artist and a bit of a rebel. That combination leads her into trouble when she decides to draw a naked man she spies on her neighbor’s property. This, of course, leads to a scandal when that picture is accidentally revealed at a house party. Thus, Esme and her model, Gabriel, while they have never meet, are forced to get married. I have a fondness for books where the couple have to get married and then are forced to figure out their relationship as they slowly start to fall in love. This book follows those plot points. Two strangers are forced to marry and figure out their lives together. I did like that Gabriel didn’t hold a grudge against Esme for causing their situation. It was clearly her fault and he could have easily blamed her. Instead, the conflicts in their relationship steam from his childhood scars. Esme starts the book as a young girl whose impulsive nature gets her forced into a marriage. However, as the book goes on, she starts to mature and temper her impulsiveness. She begins to settle into her life as a wife and mistress of the manor but does so while remaining true to herself. Gabriel, in turn, learns to work through the emotional trauma of his past and to rely on his wife. Overall, a very pleasant read.

Cover Reveal for yesterday’s #StepBackSaturday is Four Nights with a Duke by Eloisa James.
Happy #StepBackSaturday ! Any guesses on this historical romance?
The cover for Jules and Ruben is finally here! How perfect and beautiful is it with the fall vibes? If you’ve been waiting awhile for this second-chance vampire romance, Juliette Cross promises to satisfy.
Cover Reveal for yesterday’s #StepBackSaturday is Beware A Scot’s Revenge by Sabrina Jeffries. This is one of my favorite stepbacks!
Happy #StepBackSaturday ! Any guesses on this historical romance?
My current binge has been the Rules for the Reckless series by Meredith Duran. I actually started with book 5 (not pictured) and then read 1-4. I’m finally up to The Sins of Lord Lockwood which I was so excited for! His story was set up in book 5, and maybe also in another earlier Meredith Duran book? I’m not sure, someone more familiar with her books can correct me. Anyway, loving this series and can’t wait to read more of her books! Her writing style really works for me!