Bound Beneath His Pain

Bound Beneath His Pain by Stacy Kennedy 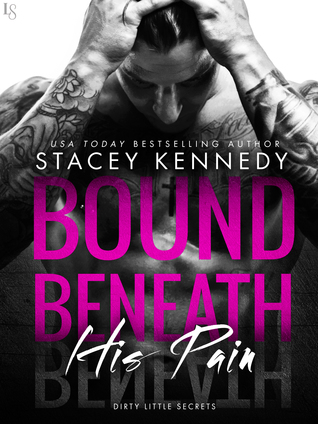 Description: The USA Today bestselling author of the Club Sin novels kicks off a deeply sensual new series by introducing readers to Micah, a man who takes what he wants—until he meets the one woman he needs.

Real estate mogul Micah Holt exerts absolute control over all aspects of his life. As a founding member of the Dominants Council that oversees San Francisco’s sex club scene, he keeps his dark side hidden away from the press, who will chase down any hint of scandal. He’s always in command of his world, careful to expose his closely guarded secrets only to those he knows he can trust. Then Allie Bennett shakes his legendary discipline. She’s beautiful, pure, untainted. But is Micah willing to sacrifice her innocence for his own selfish obsessions?

When that sexy smile makes her body burn, Allie tries with all her might to ignore it. For one thing, Micah’s her new boss. For another, he’s as complicated as he is devastatingly handsome. Still, Allie can only fight so much before she gives in to his dangerous games. She knows he’s got dark secrets. But when she discovers the true depth of his pain, Allie must decide how far she’s willing to go to light the way for love.

Bound Beneath His Pain is intended for mature audiences.

This was the first book I read by Stacey Kennedy. Honestly, I read it as a filler while I was waiting for Kresley Cole’s new book to be released. I wasn’t expecting to enjoy it as much as I did. Allie is a real estate agent, and Micah’s company just bought the company Allie works for. Needless to say, it’s lust at first sight. Their relationship has steamy sexual tension as Allie resists Micah’s pursuit. Her main objection is that she is his employee but in reality, it’s because she does not want to thrust into the spotlight of dating a millionaire playboy in fear of her own secrets coming to light. The sensuality of their relationship is added to by Micah’s dominant desires, although he hides them from Allie. What I liked most about this book is it doesn’t follow the traditional plot of BDSM books. Micah likes to be in control and is clearly a dominant but he is afraid of that side of him and calls it “the beast”. He does not try to persuade Allie into a BDSM relationship but rather tries to hide that side of himself from her. My biggest problem with the book is that there aren’t any repercussions from their workplace relationship. That just seems unrealistic to me. However, it did not detract from my enjoyment of the book. I’m certainly looking forward to the next book in the series, which I hope is about Allie’s best friend and Allie’s older brother!