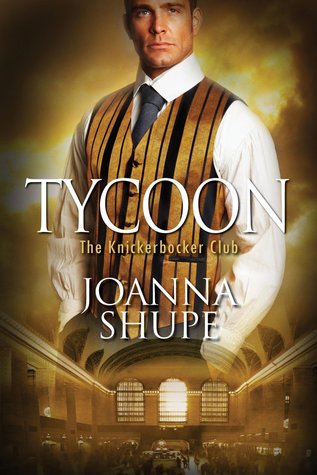 Description: Sometimes the journey is more pleasurable than the destination…

In Gilded Age New York City, the bachelors of the Knickerbocker Club spend their days rubbing elbows with Manhattan’s most elite citizens–and their nights with its most intoxicating women . . .

Standing on the platform at Grand Central Station, Ted Harper is surprised by a fiery kiss from an undeniably gorgeous damsel in distress. He’s certain she’s a swindler who’s only after his money, but he’s never met a woman so passionate and sure of herself. Disarmed, he invites her to spend the journey to St. Louis in his private car–perhaps against his better judgment . . .

Clara Dawson has long known how to take care of herself, but the savvy shop girl is at a loss when she witnesses–and becomes entangled in–a terrible crime. Desperation propels her into a stranger’s arms at the train station, but she hadn’t expected Ted to offer her the protection she so badly needs–nor did she expect their chemistry to develop more steam than the engine of the train. He’s everything she never thought she could have, and she’s everything he didn’t know he wanted. But as her secrets begin to unfurl, their fledgling romance could be in danger of derailing before they arrive at the next station . . .

Joanna Shupe has been a relatively new discovery for me, mostly because she’s a new writer. I discovered her books when she came to my local Barnes and Noble. I really liked her first trilogy, which was set in Regency England. However, her new series, The Knickerbocker Club, is set in the Gilded Age. I’m not usually the biggest fan of novellas. I tend to find them too short. Often times, the background of the main characters is not well fleshed out. My other issue is that the love story plot usually feels rushed, especially if there’s other plot points happening within the story. However, I do recommend Rock Courtship by Nalini Singh if you want a well-done novella. Okay, tangent over!

I really liked both of the characters in this book. Clara was interesting and determined to make an independent life for herself. When she gets pulled into a dangerous situation, she uses her brain and comes up with a solution. Ted Harper just happens to be at the right place at the right time and becomes that solution. He’s a self-made millionaire banker but Clara just thinks that’s he’s a bank employee and is unwilling to pull him into her problems. They fight their chemistry as well as dangerous outside forces. This novella is an excellent set up for the next book and I can’t wait to read what Joanna Shupe writes next!