About Hard As Steel : A Hard Ink/Raven Riders Crossover Novella

After identifying her employer’s dangerous enemies, Jessica Jakes takes refuge at the compound of the Raven Riders Motorcycle Club. Fellow Hard Ink tattooist and Raven leader Ike Young promises to keep Jess safe for as long as it takes, which would be perfect if his close, personal, round-the-clock protection didn’t make it so hard to hide just how much she wants him—and always has.

Ike Young loved and lost a woman in trouble once before. The last thing he needs is alone time with the sexiest and feistiest woman he’s ever known, one he’s purposely kept at a distance for years. Now, Ike’s not sure he can keep his hands or his heart to himself—or that he even wants to anymore. And that means he has to do whatever it takes to hold on to Jess forever.

I’m thrilled to be here celebrating the release of my 21st book, HARD AS STEEL! After a midnight break-in at her apartment, close friends and Hard Ink Tattoo co-workers Ike Young and Jessica Jakes are forced into hiding—and forced to confront the feelings they’ve always denied for one another. I have always adored friends-to-lovers and forced proximity stories, and HARD AS STEEL delivers that and more, including a taste of both my award-winning and best-selling Hard Ink and upcoming Raven Riders series! Check out this excerpt:

“Night,” she said, heading up the steps.

“Night,” he replied, watching her hips sway in a pair of silky black shorts. Combined with the form-fitting black tank top and those perfect-for-grabbing pigtails, she was going to make it damn hard for him to fall asleep tonight.

He turned out the light and went horizontal, the soft couch so comfortable against his sore back even though it was a little too short to fit his whole body. He adjusted his erection, willing it to get with the no-sex-with-Jess program. Problem was, in the quiet darkness, Ike could hear her moving around in the loft. Soft footsteps on the wood floor. The shifting of covers. The squeaking of the box spring. And all that did was invite his imagination out to play. Easy since he had so much material to work with after sleeping with Jess wrapped around him the past two nights.

His shoulders and chest knew what the silk of her hair felt like when it skimmed over his skin. His hip knew the heat of her core when she slept with her knee across his thighs. His hands had memorized the curve of her lower back and the shape of her biceps and just how much of her luscious ass he could fit in his palms.

Ike knew what her mouth tasted like, how tight her legs could wrap around his waist, and how fucking beautiful the combination of ink and steel was on her skin.

Jesus, his cock was never going to let him go to sleep at this rate.

And was it fucking hot in here or what? He tossed the cover off, wishing he had a ceiling fan downstairs, too. Something for the to-do list around this place.

Ike sighed and flung his hand over his head. And wondered why the hell he was torturing himself this way.

He could just go up there and get in the bed—and take what he wanted, and what he knew Jess would be only too happy to give. Neither of them was immune to the mutual attraction that had always been there between them. And her reaction to his kiss the other day made it crystal fucking clear that she was waiting for him to make his move.

Jess had plenty of one-night stands and casual hook-ups. Ike knew she was perfectly capable of handling that kind of relationship.

Except Ike wasn’t a clueless idiot, and he wasn’t in the habit of doing things he knew damn right well would hurt someone he cared about. Jess wore her emotions like she wore her ink—out loud and unapologetically. He had a pretty good idea that she was rocking some more-than-friendly and more-than-physical feelings for him. Right now, she thought them unrequited, and that kept a kind of sexually tense equilibrium between them. But if he let himself off the leash—even just once—he’d very likely raise and dash her hopes, give her all kinds of mixed signals, and screw things up royally between them.

He shook his head and heaved a deep breath. If he wasn’t going to go the distance with her, he had no business taking the first step. 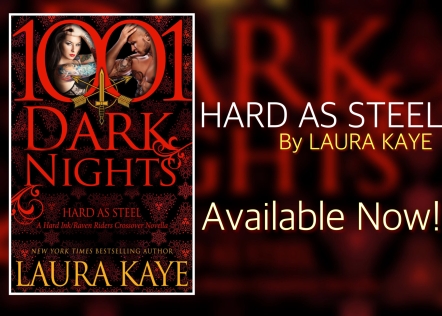 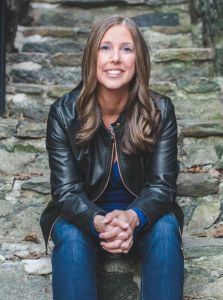 Laura is the New York Times and USA Today bestselling author of over twenty books in contemporary and paranormal romance and romantic suspense. Growing up, Laura’s large extended family believed in the supernatural, and family lore involving angels, ghosts, and evil-eye curses cemented in Laura a life-long fascination with storytelling and all things paranormal. She lives in Maryland with her husband, two daughters, and cute-but-bad dog, and appreciates her view of the Chesapeake Bay every day.

This book was both an excellent ending to the Hard Ink series and start to the Raven Riders series. Jess and Ike had been co-workers and friends for years but there was always an attraction between them. After Jess’s apartment was broken into, an event which has ties to the Hard Ink series, Ike takes Jess to his house at the Raven Riders compound to keep her safe. There they explore moving their relationship from friends to more.

What I liked the most about this book was the depth Laura Kaye managed to bring to her characters in a short span of pages. One of my biggest problems with novellas is the characters often feel under-developed. However, in this book, both Ike and Jess had to overcome guilt from their pasts to sustain their relationship. Past events had scarred both of them but together, they were able to heal and move on with their lives. The caring and love the characters felt for each other was clear. In addition, the steaminess of this book was off the charts! The chemistry between Ike and Jess was undeniable and when they did become intimate… wow! *fans self* Overall, this was an excellent, well-developed novella. Now, I can’t wait for the next Laura Kaye book!