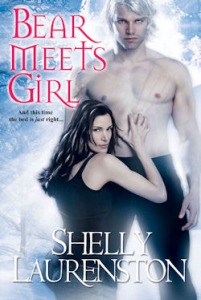 Description: He’s big, burly, and way smarter than your average shapeshifting bear. He’s also about to get trapped by own his game. . .

Lou Crushek is a reasonable, mellow, easygoing kind of guy. But once someone starts killing the scumbags he works so hard to bust, that really gets under his fur. Especially when that someone is a curvy she-tiger with a skill set that’s turning Crush’s lone-bear world upside down–and bringing his passion out of hibernation. . .

As a member of an elite feline protection unit, Marcella Malone has no problem body-dropping anyone who hunts her kind. But Crush is proving one major pain in her gorgeous tail. The only reason she’s joined forces with him is to track down the wealthy human who’s got her entire species in his ruthless sights. It sure isn’t because Crush’s stubborn and contrary attitude is rubbing Cella in all the right ways. .

Review: Honestly, I felt very lost for most of this book. I really like to start series with the first book and then watch the world progress. But lately, I’ve been picking up books mid-series and then complaining when I’m confused. I know, it doesn’t make any sense. This book, however, I was more confused than most. Paranormal worlds take a lot of world-building and I feel like I missed a lot of that in this book. Honestly, I’m not even sure if the ‘full-humans’ know about shifters.

On top of the confusion, I really wasn’t a fan of the main couple, Crush and Cella (another alliteration couple!) Cella was too fierce and over-the-top. Don’t get me wrong, I’m a huge fan of kick-ass heroines. But those heroines need to be smart too, and pick their battles. I didn’t like how Cella would run into things half-assed, and just start throwing fists. I just felt like there wasn’t enough details about her back-story with her daughter and family.  Crush, on the other, I couldn’t get a good read on. Overall, I liked them as a couple. Crush tempered Cella’s crazy, over-the-top personality and she liven-up his dull, by-the-book life. Individually, however, I wasn’t a fan.

The main plot of the book was about the bad guy hunting shifters. This was intriguing plot point but not well-developed in this book. And I kept getting confused by the different groups and who was working with who. I do think I’ll try to read the other books in the series and see if I can better understand the world. Some of the minor characters, like Dez, Crush’s partner, were interesting and I want to read their stories.

My library copy of Accidentally Engaged by Farah Heron finally arrived and I’m so excited to read it!
Cover Reveal for yesterday’s #StepBackSaturday: Under Your Spell by Lois Greiman. I feel like I read or at least looked into this series years ago, before I was tracking my books on GoodReads.
Happy #StepbackSaturday! Any guesses on this historical romance?
Happy #CoverLustFriday! I found this gorgeous book at a used bookstore last weekend. I’ve never read Lynette Vinet; have you?
I found this copy of Love Only Once by Johanna Lindsey at a used bookstore this weekend. I don’t think it’s the original cover but it’s definitely an old copy of the book. It doesn’t really look Regency, does it?
Cover Reveal for yesterday’s #StepBackSaturday is Captured Innocence by Susan Sizemore.