What To Do With A Duke

What To Do With A Duke by Sally MacKenzie 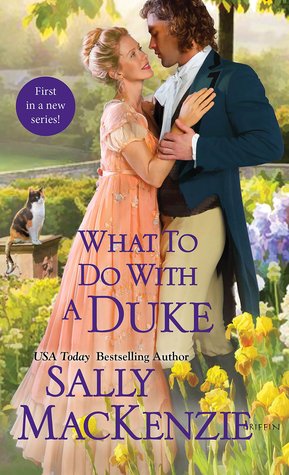 Description: Welcome to the charming, fatefully named village of Loves Bridge, where a woman destined for spinsterhood can live a life of her own choosing—or fall unexpectedly, madly in love…

Miss Isabelle Catherine Hutting would rather be lounging in the library than circling the ballroom in search of a husband any day. So when Cat hears that the town’s infamous Spinster House is open for a new resident, she jumps at the chance to put all this marriage business behind her. But first she must make arrangements with her prospective landlord, Marcus, the Duke of Hart—the most handsome man she’s ever seen, and the only man who’s ever impressed her in the least…

With her wit, independent spirit, and not least of all her beauty, Marcus can’t help but be stirred by Cat. It’s terribly unfortunate he’s not looking to marry, given the centuries-old curse that left his family with the Spinster House to begin with. No duke shall live to see his heir’s birth. But is there a chance the curse could be broken—in true fairy-tale fashion—by an act of true love? The race to Happily Ever After is about to begin…

Review: It has been a while since I’ve read a Sally MacKenzie book. In fact, I had to keep running the name through my mind before I could finally place it with the Naked Nobility series. I had read a few books in that series but lost interest. There was something off-putting about the series and her writing that I just couldn’t put my finger on. So when I received a copy of What to Do with a Duke, I decided to give it another chance and look at MacKenzie’s writing through fresh eyes.

The premise of the book was quite interesting. Marcus, Duke of Hart, had an ancestor who seduced and impregnated a merchant’s daughter, Isabelle. When the duke married someone else, Isabelle killed herself and their unborn child but not before she made legal requirements for the duke and his heirs to fund Spinster House in the village of Loves Bridge. Oh, and curse the duke and his descendants so they will die before their heir is born. It turns out there is a novella before this book which explains how the Spinster House became empty and why Marcus is forced to return to the village. Once there, he meets the vicar’s daughter, Cat, who wants to become the next resident of the Spinster House.

Despite the premise, I really wasn’t the biggest fan of either character. Marcus dwelled too much on his impending death and didn’t really have much of a personality aside from his fatalistic qualities. Cat was too obsessed with wanting quiet to write a book, though in a house with seven younger siblings, it was a little understandable. Towards the end of the book, I felt like she was too willing to give up her goals to marry the duke. It seemed like Cat had wanted the quiet of the Spinster House but once she had it, she didn’t know what to do with it. I did believe that the characters loved each other but I didn’t really like how their love story played out.

Towards the end of the book, I realized why I was never a fan of Sally MacKenzie’s books. To me, it seemed like her grasp on Regency England wasn’t traditional for a Regency novel. Her characters are less bounded by the rules of society- i.e. the duke refusing to marry the lady who tried to trap him into marriage concern for his reputation. Other characters helped the couple circumvent society’s norms. While this would have been fine in other novels, the author then takes societal norms and uses them as a plot point, i.e. the duke proposing because he ruined her reputation by kissing in the bushes. I’m not sure if the books, especially in her Naked Nobility series, were supposed to be satirical, but I just wasn’t a fan. There were other little things that took away from my enjoyment of the overall story. Cat’s friendship breaks apart over the Spinster house, and her friends spread rumors and hurt her reputation and yet, she forgives them and moves on without any discussion or anger. I may be nitpicking but to me, it just seemed like the book didn’t flow smoothly.