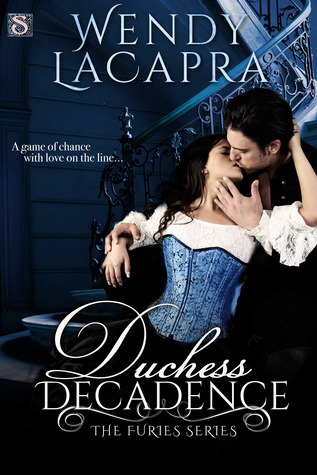 Description: London, 1784
Thea Worthington, Duchess of Wynchester divides her time between social engagements and playing her luck against fickle fortune. Yet every gamble is only a bluff—a means to hide from the pain deep within her, and the loss of a babe she never held in her arms. Now Thea’s luck is about to run out. Her estranged husband has returned and seeks a reunion…

Plagued with guilt over what happened to his wife three years ago, the Duke of Wynchester has kept his distance. The duke is resolved to piece his family back together, especially now that he’s discovered his beloved brother—long thought dead—still lives. But Thea’s lovely, porcelain facade is on the verge of cracking…spurred on by the duke’s brother’s secretive, malevolent animosity.

With everything riding on her future, Thea plays a daring game of chance for love and her marriage…and this time, the dice are most certainly rigged.

Review: The premise of this book was intriguing. The reunion story between a scandalous duchess and her staid duke; sign me up I thought! Well, not so fast. If I had done more research, I would have released this is the third book in a trilogy. As with most romance novels, it can be read as a stand-alone, however Duchess Decadence seems to pick up in the middle of the previous stories. A lot of the plot revolved around events that took place in the first two books. While the author does a good job of summarizes the previous events, I felt lost. What had made catching even more difficult was the nature of the book. The reunion between Thea and Wyn would have been sweeter if I had read the previous books and seen their interactions before this book.

Surprisingly, I quite enjoyed the evil brother returns from the dead trope. I think this was because I liked that heroine wanted to be proactive in protecting the hero. The disreputable wife returns to protect her husband has quite a flair to it. However, in the end, she really didn’t too much to protect him. The desire was there but there wasn’t any follow through.

I wasn’t a fan of the author’s constant use of the word “sentiment” when Wyn was falling in love with Thea. He was constantly lamenting his loss of control to sentiment, which just seemed odd. Also, I just want to take a moment to talk about the cover. It what world is that a Georgian duchess’s dress? She looks more like a pirate wench at a Renaissance faire. Sorry, history major problems. I have to put those 4 years and pile of debt to use for something.

Overall this was a nice reunion story but it did take me a while to get used to the couple. I did like that they explored their intimate connection together after being reunited and having realized they should have a more fulfilling sex life. The book did touch on some serious notes, like Thea’s miscarriage, which made me want to reread Midnight Pleasures by Eloisa James. There was also a lot of history, such as the Gordon Riots, the role of Parliament, and the East India Company. However, I would recommend reading the first two books before this one.

Some people sleep with the enemy...but only I could get knocked up by him too.
Cover reveal for yesterday’s #StepBackSaturday is Say You Love Me by Johanna Lindsey. This book is definitely problematic but I still reread it.
Happy #StepBackSaturday ! Any guesses on this historical romance?
I’ve been on a work trip for the last few days and Astrid Parker Doesn’t Fail by @ashleyhblake has been my read at night!
I’m working my way through a reread of the Guild Hunters series by Nalini Singh and I’m up to Naasir’s book!
It’s been weeks since I read Archangel’s Resurrection and I’m still thinking about it.