Falling Under by Lauren Dane 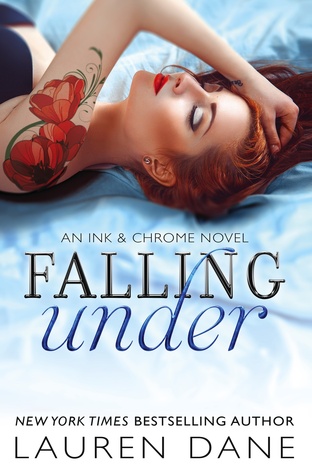 Duke Bradshaw, co-owner of the custom motorcycle shop Twisted Steel, is great with his hands and not afraid to get dirty . . . especially in his fantasies about his redheaded neighbor Carmella Rossi.

Carmella has been secretly lusting after her hot, tattooed neighbor for the last three years. His gravelly voice combined with the throaty purr of his custom bike never fails to send thrills down her spine. When Duke asks her to join him at the shop, she can’t say no. Soon their days together spill over into nights that bring her pleasure beyond anything she imagined. But Carmella grew up with bikers, and knows how bad a bad boy can be. Can she put herself at risk for someone who has heart-breaker written all over him?

Review: After I finished Opening Up, I spent a minute checking to see if my library had a copy of Falling Under. It didn’t so I immediately bought it. After the first book, I was really interested in Duke’s story. To my delight, it was a boss and employee story, which I haven’t read in a while! Honestly, most boss and employee stories I read are the Harlequin Presents ones. You know the ones I talking about, with ridiculous titles like His Pregnant Virgin Secretary. Okay, so I just googled that and there isn’t a Harlequin called His Pregnant Virgin Secretary. Though there is one called Innocent Secretary, Accidentally Pregnant and one called CEO’s Expectant Secretary. Both of which I’ve read… Moving on.

I really liked the pacing of this book. Duke and Carmella resisted their attraction to each other for a while but when they gave in, they were committed to both making the relationship work and keeping it from interfering with their jobs. This book focused more around Twisted Steel, the lack of which had disappointed me about the first book. Like the first book, Falling Under also addressed family relationship. In Carmella’s case, her parents were toxic, both to themselves and to her. She essentially supported her pill-popping mother, whose addiction led to a major misunderstanding between Duke and Carmella. As the reader, I marveled with the family struggles Carmella dealt with. The questioned is posed of whether it is necessary to cut family members out of your life if they keep hurting you and themselves. Duke supported her, minus the misunderstanding, throughout her family issues and let Carmella take point on how to deal with them. He didn’t push in and try to solve everything for her, a la most alpha heroes. He just supported and loved her through the problems.

Like all Lauren Dane books, this one was steamy, though not in the same way as Opening Up. Carmella was not afraid of her sexuality and owned her attraction to Duke once they decided to give in to their passions. Duke respected her family issues and did not pressure her into being more emotionally available. Their relationship grew over time and it was easy to see how they laid the foundation for their future together. And what can I say, I’m sucker for any book where the hero says “I love you” before the heroine.

She swayed, just slightly, but he responded, wrapping his arms around her as they danced, and he fell that last bit into love with her when she rested her check on his chest like she was meant to fit right there.

“I want to be what you see when you closed your eyes.”

“She seemed to float into my life, and once she touched down, the roots grew very deep very fast. I wasn’t expecting love. Knocked me on my ass.” Duke said.