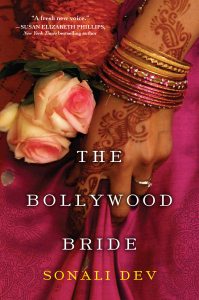 The Bollywood Bride by Sonali Dev

Description: Ria Parkar is Bollywood’s favorite Ice Princess–beautiful, poised, and scandal-proof–until one impulsive act threatens to expose her destructive past. Traveling home to Chicago for her cousin’s wedding offers a chance to diffuse the coming media storm and find solace in family, food, and outsized celebrations that are like one of her vibrant movies come to life. But it also means confronting Vikram Jathar.

Ria and Vikram spent childhood summers together, a world away from Ria’s exclusive boarding school in Mumbai. Their friendship grew seamlessly into love–until Ria made a shattering decision. As far as Vikram is concerned, Ria sold her soul for stardom and it’s taken him years to rebuild his life. But beneath his pent-up anger, their bond remains unchanged. And now, among those who know her best, Ria may find the courage to face the secrets she’s been guarding for everyone else’s benefit–and a chance to stop acting and start living.

Rich with details of modern Indian-American life, here is a warm, sexy, and witty story of love, family, and the difficult choices that arise in the name of both.

Review: This book turned me into an emotional wreck. Barely two chapters into the book and I started crying. I don’t think I stopped until the very end! This book will tug at every part of your heart, break it and then put it back together again. Ria and Vikram are the best romance novel couple, the one who truly complete one another and belong together.

This truly is the month of reunion stories. And the second to have the couple be apart for ten years, the first being Susan Mallery’s Thrill Me.  Ria and Vikram started out a childhood friends whose relationship matured as they did. However, 18 year old Ria broke Vikram’s heart, for pretty decent reasons, and went on to become a Bollywood star, nicknamed “The Ice Princess.” The couple is reunited, ten years later, for the wedding of their mutual cousin. The spark between them, and their past, comes out to play. Dev takes the reader on an emotional ride as both Ria and Vikram try to fight the draw between them, each for their own reasons. One of the best parts of the book is the undeniable chemistry and connection between Vikram and Ria. Their desire for each other has only strengthen in their years apart and quickly becomes too strong for them to fight. They had formed an unbreakable connection growing up and the distance of ten years did nothing to weaken it.

One of the best parts of this book was the deep level of protection the hero and heroine felt towards each other. Vikram had the natural, alpha male protectiveness towards Ria going on. Even more interesting was Ria’s protection of Vikram. In fact, their past breakup stemmed from Ria’s desire to protect Vikram from her dark secret. She had valid, albeit misguided reasons for breaking up with him. Unfortunately, all she ended up doing was hurting both him and herself even more. One aspect of this book I wasn’t a fan of was the narration. The book is in third person but the reader only gets glimpses into what Ria is thinking, not Vikram. Usually, for romance novels in third person, the reader gets to experience the emotions of both the hero and the heroine. I would have like to see into Vikram’s mind, perhaps to understand the reasoning behind his actions a bit more. Despite this, the reader is quickly pulled into a masterfully crafted book, complete with an elaborate wedding and an array of intriguing minor characters.

A Bollywood Bride is an emotionally charged, heart-wrenchingly deep book. It’s the kind of romance novel that reminds you why you loved the genre to begin with. Sonali Dev has breathed new life and culture into romance and I can’t wait to read what she writes next! An instant auto-buy author!