Heart of Obsidian by Nalini Singh

I’ve read Heart of Obsidian  by Nalini Singh at least four times. Nalini Singh is one of my absolute favorite authors ( Meeting Nalini Singh ) and I find myself rereading books from her Psy-Changeling series at least once every 3 months. Heart of Obsidian is the book I didn’t know I wanted until the later books in the series. When we’re first introduced to Kaleb Krycheck in Visions of Heat, he is presented as almost a potential villain. ( His heroine, Sahara Kyriakus is also mentioned briefly in Visions of Heat) And he maintains that potential villain status throughout the series, as a Councilor. 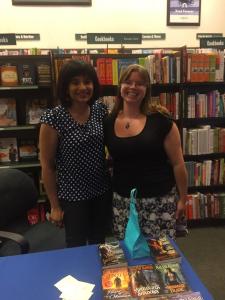 However, as the series progresses, hints about Kaleb present a far more intriguing character. Perhaps he isn’t the one-dimensional villain we thought. It becomes clear that there is a driving force behind Kaleb’s actions, a person he is looking for. And at the very end of Tangle of Need , Kaleb finally finds that person.

This book is an emotional roller-coaster. When we are first introduced to Sahara, she is trapped in a labyrinth in her mind, designed to keep her from breaking under the torture of her captors. When Kaleb finally finds her, that labyrinth starts to unravel. She feels a tie to Kaleb but her memories are slow to return. In the meantime, Kaleb works to consolidate his power over the Psy-Net.

One of the things I love most about this book, and which is the driving point, is the relationship between Kaleb and Sahara. Their bond was formed in childhood and bathed in blood. It was able to withstand years apart and horrific torture. While you realize early on that Sahara and Kaleb share a deep past, their relationship essentially begins anew in the time it takes for Sahara’s memories to return. There is the best of both worlds: watching the characters fall in love, romantic and sexual love, while at the same time having a shared bond of friendship and devotion from their childhood.

The complex character which is Kaleb becomes more understandable throughout this book. His Silence always seemed rock-hard and yet, there remains this absolute devotion to Sahara.  “You”, he said, “are the single exception that rule”. The oldest, deepest, most beautiful flaw in his Silence.”Without you, I would be a monster.”

Sahara is his anchor, the sole reason Kaleb does not become a monster, a dictator. While such influence does not seem believable, the characters and world Nalini Singh has weaved in this book, makes it so.

“Sahara dug her fingers into his arms. “You do not do this,” she said, and it was an order. “You do not let that monster destroy the life we are going to have together. You are mine, not his. You have always been mine.”
The claiming was so absolute, it dared him to fight. Kaleb had no intention of doing so. Shudd 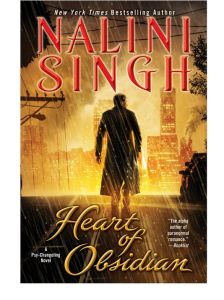 ering, he crushed her to him. “Yes,” he said, battling the rage because if he gave in to it, he would lose Sahara. “I’m yours. I will always be yours.”

In addition to the love-story between Kaleb and Sahara, this book also chronicles the fall of Silence. There are devastating attacks by the Pure Psy on different cities, giving Kaleb and the Arrows a chance to demonstrate their power. But through the midst of this terror, there is hope for the future, one without Silence. There are scenes of Psy, humans, and changelings all working together to help the injured and locate the dead. The last Pure Psy attack ends with Kaleb and Sahara, in partnership with SnowDancer and DarkRiver, working to prevent it.

This is the first Psy-changeling book in which both the hero and the heroine are Psy. The packs, DarkRiver and SnowDancer, are the centers of Nalini Singh’s Psy-Changeling universe and the books which move away from the packs, i.e. Blaze of Memory and Bonds of Justice, are my least favorite. However, with Heart of Obsidian, it is clear we are gearing up for more Arrow/Psy books. By starting this arc with Kaleb and Sahara, you are eased away from the packs and into the transition from Silence to a new world. While hopefully the story-line will not move too far away from the packs ( there are still SnowDancer lieutenants I want stories for), I am happy with the currently arc of the series and the role the Arrows and Kaleb will play in the upcoming books. The transition is made all the easier by Kaleb’s protectiveness of Sahara, which mirrors any of the changeling heroes we’ve meet.

I’ll end this review with some of my favorite quotes from Heart of Obsidian. Go read it. Now!

“Love is the greatest form of loyalty, one that places happiness of the beloved over the lover.”

“He would do things for he’d do for no one else, but while he’d empty the sky for her so she could spread her wings, fly, he would not set her free. She belonged to him, would always belong to him”

“All right.” Shimmering droplets on her eyelashes, stars caught in transition. “But will you replace it with something for me?”
“Anything.” His body was hers.
Brushing her fingers over his lips, she said, “You gave me an eagle. I want to give you one, too.” A tender kiss pressed to the scar. “I want us to fly together.”

“So we literally made the earth move? A slight pause, before Kaleb said, I suggest we don’t engage in sex in populated areas.”